Happy Monday! We’re coming off of a great week for the Run Warren Run campaign, with more than 200 house parties across the country over the past weekend, the official opening of our Des Moines, Iowa campaign office, and an inspiring floor speech from Sen. Warren.

NEW THIS MORNING IN VANITY FAIR: ‘Why Mark Ruffalo, Kim Gordon, and the Other Cool Kids Want Elizabeth Warren to Run’ – Joe Pompeo covers the emerging Artists for Warren effort:

On another night, the scene could have unfolded at any number of store or gallery openings in downtown Manhattan or across the river in Brooklyn. But the guests had assembled not to toast a new sneaker line or video installation. They were there to demonstrate a potential base of support for the as yet inchoate presidential prospects of Elizabeth Warren, the first-term Massachusetts senator whose every-woman rhetorical style and anti-Wall Street crusading has inspired a movement to draft her as the people’s candidate of 2016. …

A letter to Warren urging her to run for president has so far collected names from the like of film, television, and music-industry fixtures including Edward Norton, Susan Sarandon, Darren Aronofsky, Natasha Lyonne, Danny Goldberg, Joss Whedon, Matt Bomer, Laurie Anderson, Olivia Wilde, Kim Gordon, and the Chapin family, as well as Ruffalo, Sevingy, Spooky, Hanna, Horovitz, and others, according to a draft provided by Dawn to Vanity Fair. There are possible plans for a second Artists for Warren party in L.A. around the Oscars to keep building buzz.

SUPPORTERS HOST 200+ HOUSE PARTIES ENCOURAGING WARREN TO RUN. Over the weekend, thousands of Elizabeth Warren supporters gathered in more than 220 house parties across the country to discuss ways to encourage Sen. Warren to enter the presidential race. Hosts held parties in 46 states, plus Washington, DC, Puerto Rico, and Guam. 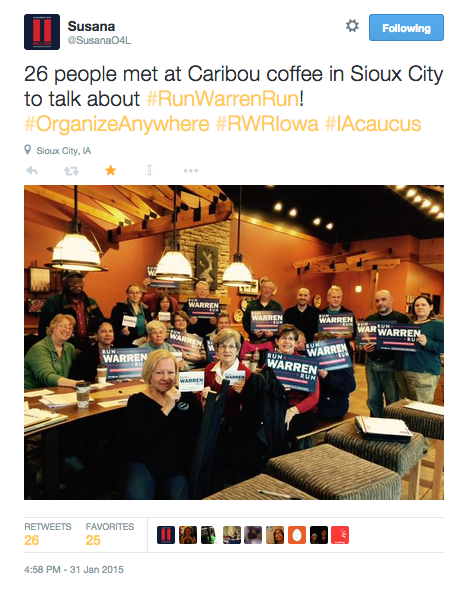 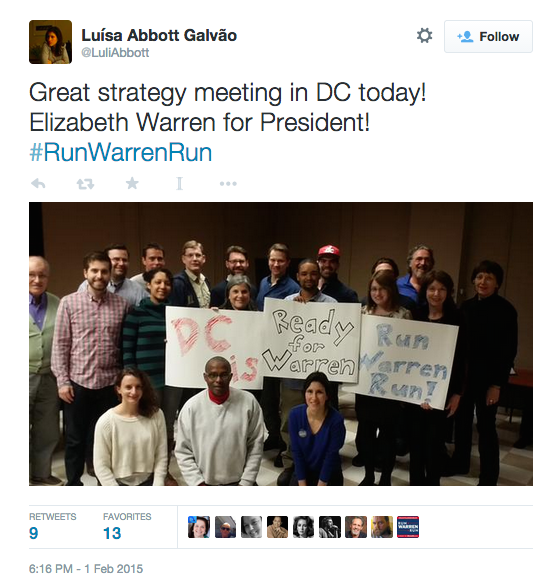 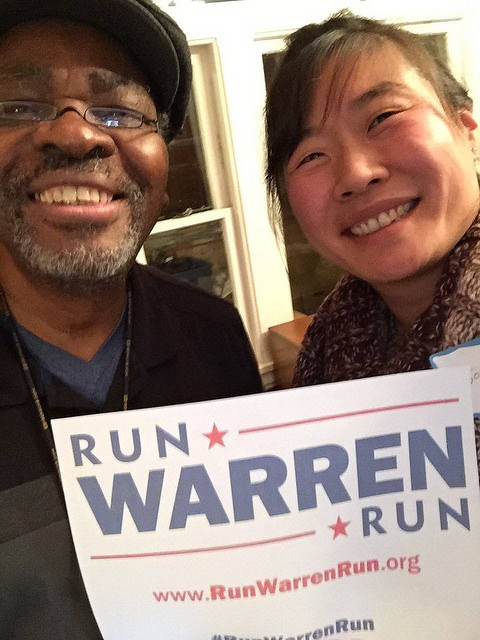 NEW IOWA POLL SHOWS MOMENTUM FOR WARREN. One year from the Iowa Caucuses, the latest Des Moines Register/Bloomberg Iowa Poll shows Elizabeth Warren surging: 16 percent of likely caucusgoers have Warren as their first choice, up from 10 percent in October. Here’s more from the Register’s Jason Noble:

More Iowans have become aware of Warren, and that higher visibility has translated to higher popularity — a positive development for any candidate, said J. Ann Selzer, who conducts the Iowa Poll for the Register and Bloomberg Politics.

“This poll reveals Warren as more competitive against the front-runner than she was a few months ago,” Selzer said.

NEW CAMPAIGN VIDEO: Check out this video showing the momentum of the Run Warren Run campaign as supporters launched in Iowa and New Hampshire in recent weeks. VIDEO

“Not a day goes by without a major media outlet speculating on the possibility of a Warren presidential run, parsing her repeated denials for signs of any subtle shift toward the affirmative. Her speeches—whether to special-interest groups or on the floor of the Senate—rack up hundreds of thousands of views on YouTube, as if she were releasing hit singles.”

MADDOW CALLS FOR CONTESTED PRIMARY. On a recent appearance on “The Late Show with David Letterman,” Rachel Maddow discussed the benefits of having our best candidates in the presidential race: 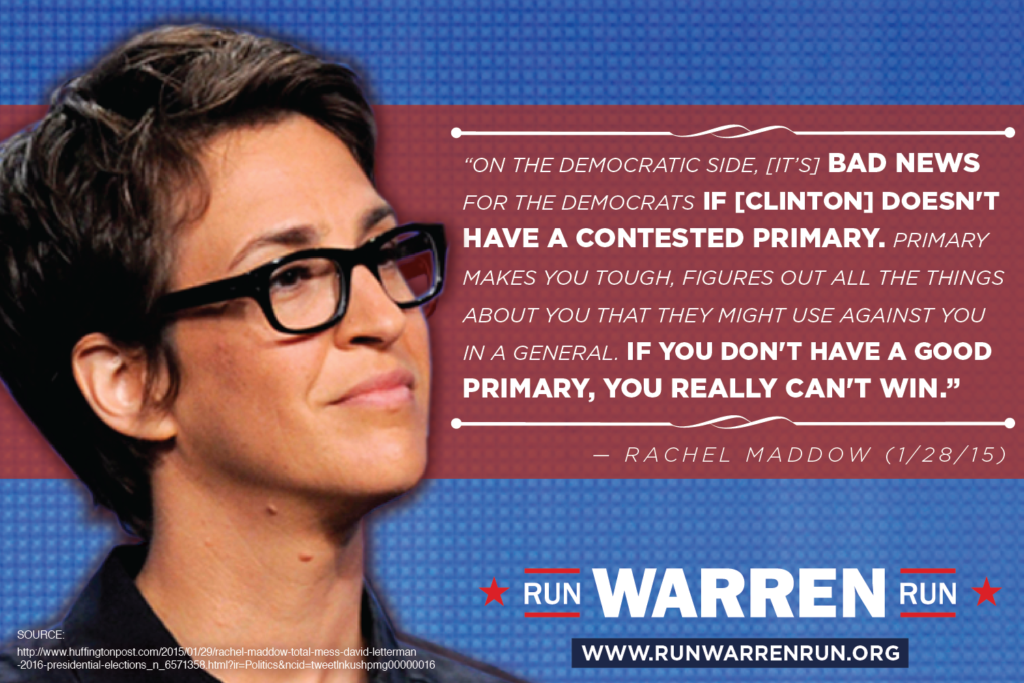 WARREN TAKES ON BIG PHARMA: Senator Warren introduced the Medical Innovation Act last week, legislation that would require large pharmaceutical companies that break the law to reinvest a small percentage of their profits in the National Institutes of Health. The funding  would help ensure the United States stays on the cutting age of medical research and innovations.

AND, FOR YOU SCANDAL FANS, A LITTLE FUN FOR YOUR MONDAY: Don’t miss this BuzzFeed post showing what we all already know to be true—that Elizabeth Warren is a gladiator in a pantsuit.