News just broke that President Obama is offering to cut Social Security as part of the debt deal they’re working out in Washington right now.1 And reports say he’s stopped pushing to eliminate the Bush tax cuts for millionaires in these negotiations.2

If both these things are true, it’s an absolute outrage. When asked, 75% of MoveOn members said that if a deal like this were to go through, they’d be less likely to donate to or volunteer for President Obama’s re-election campaign.

If you agree, can you share this graphic on Facebook today, and make the text your status? 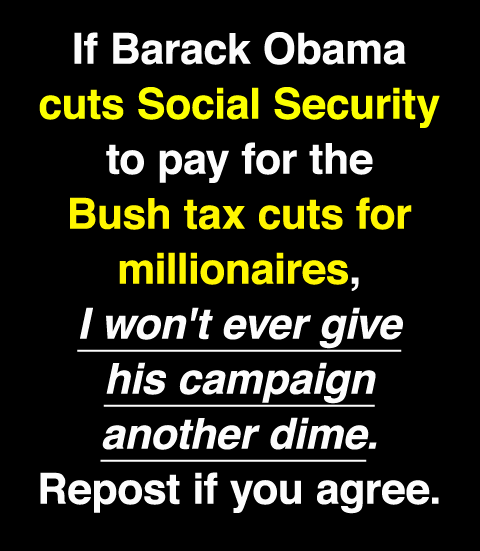 Here’s the text to copy into your Facebook status when you share this graphic: “If Barack Obama cuts Social Security to pay for the Bush tax cuts for millionaires, I won’t ever give his campaign another dime. Repost and reshare this image if you agree.”