Happy Friday! Don’t miss this week’s exciting Run Warren Run news from Iowa, where we’ve started hiring staff, and New Hampshire, where we formally launch tomorrow, and the story of how Sen. Warren won the week, below.

“As a native Iowan, I know first-hand how critical a role the Hawkeye State plays in shaping our presidential contests, and I’m excited to join hundreds of thousands of Americans who are energized by Sen. Warren’s progressive economic vision,” said Blair Lawton, the Run Warren Run Iowa Field Director.

TOMORROW—RUN WARREN RUN LAUNCHES IN NEW HAMPSHIRE. Granite State activists will gather on Saturday to kick off the Run Warren Run campaign in New Hampshire, reports Dan Tuohy in the New Hampshire Union Leader. The event is at noon ET in Manchester and will feature Democracy for America and MoveOn members from New Hampshire; attendees can sign-up here and interested media should RSVP to Neil Sroka at 847-219-8491 and nsroka@democracyforamerica.com

“Our folks on the ground are going to reach out to the really strong activist community that exists in New Hampshire,” Neil Sroka, Democracy for America’s spokesman tells CNN’s Dan Merica. “We want to show Elizabeth Warren that if she decided to get into the race, there is a strong grassroots army ready to do everything a candidate needs to run a competitive race in the Granite State.”

TECH LEADERS SPEAK OUT IN SUPPORT OF WARREN. A growing number of leaders in the technology industry, many of them former tech and digital staffers for President Obama’s campaigns, are joining the movement to draft Sen. Warren into the presidential race. SF Gate’s Joe Garofoli has more:

“If Warren jumped in, then what I like to call the ‘progressive tech wing’ would have a voice in the primary,” said Tim Wu, a Columbia University professor and Warren supporter who coined the term “net neutrality.”

Tech for Warren is expected to formally roll out a list of its members in the next few weeks. Its ranks already include Obama’s key tech advocates, including his 2012 campaign’s chief information officer, Rajeev Chopra. … The tech crowd favors Warren because she, like many of them, is seen as disrupting the status quo in Washington.

“Tech people see themselves as that outsider, disrupting force that likes to speak truth to power,” said Catherine Bracy, a San Franciscan who was director of the Obama campaign’s tech field office in San Francisco in 2012. “And that’s what she is like, too.”

GOP SOUNDING MORE LIKE WARREN. As Vox’s Matt Yglesias writes, several prominent Republicans are starting to sound more like Sen. Warren when talking about economic issues. “Today’s Republican — even when they’re literally the same people as the ones who ran a few years ago — arguably sound more like Elizabeth Warren, offering an outsider critique of an economic status quo. And that’s no coincidence.” Please don’t be fooled by the rhetoric — when it comes to the substance, there is nothing progressive about Republicans’ economic agenda.

DON’T TELL W — EVEN DAVID FRUM IS CALLING ON WARREN TO RUN. “If a politician expresses ideas that are shared by literally tens of millions of people—and that are being expressed by no other first-tier political figure—she owes it to her supporters to take their cause to the open hearing and fair trial of the nation.” Read more from David Frum’s Atlantic piece.

MAIN STREET WINS, WALL STREET LOSES. Sen. Warren’s dogged campaign against the nomination of Wall Streeter Antonio Weiss to a top spot at Treasury ended in a victory this week, as Weiss pulled his name from consideration. Here’s more on the impact of Warren’s game-changing campaign, supported by groups like CREDO and Democracy for America, and how she’s “taking control of the Democratic agenda” from The New Republic’s David Dayen:

“[Warren] orchestrated and controlled the Weiss fight, very vocally going after him and everything his selection represents about the coziness between Washington and Wall Street, on both sides of the aisle. Without Warren’s opposition, Weiss would still be the nominee. …

“Warren saw Weiss’s nomination as another example of leading Democrats reflexively turning to Wall Street for economic expertise, which consequently leads to policies favoring the financial industry. And despite her new role in the Democratic leadership of the Senate, she was willing to make a stink about it, enough so that she rallied other senators, from Tammy Baldwin on the left edge of the party to Joe Manchin on the right, to her side. …

“The Weiss affair will certainly lead to the White House thinking twice about future nominees. The Progressive Change Campaign Committee has already floated ‘progressive economic thinkers’ like former Senator Byron Dorgan and economist Dean Baker for the Treasury spot. At the very least, in the future you should expect Warren to be consulted on a nominee before, and not after, the announcement.”

MORE on this from Dayen on Shift by MSNBC. 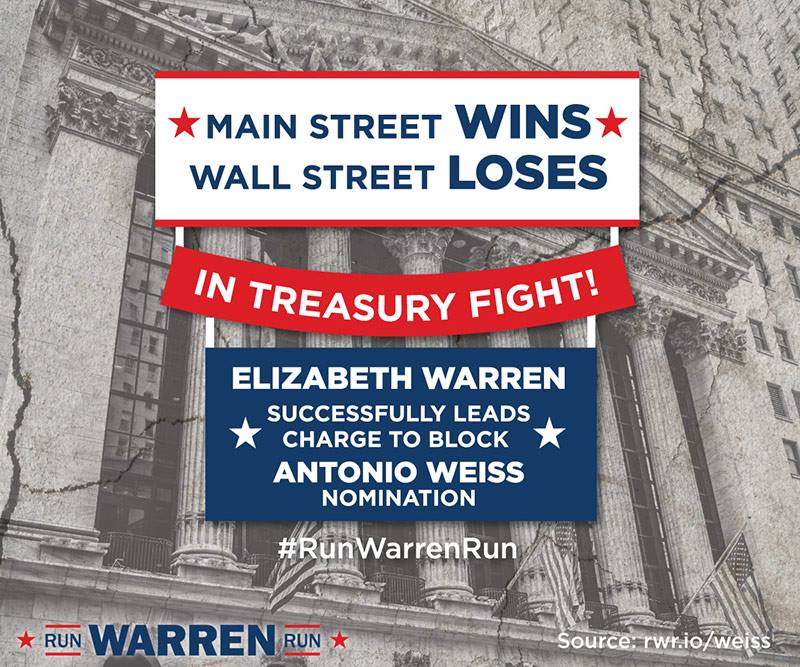 “This is a defining issue of our time, and we will not back down, no matter how condescending the big banks or their allies are, or how much they spend on lobbyists.” –Anna Galland, executive director of MoveOn.org Civic Action, on the Weiss victory in the New York Times

Miles Mogulescu in HuffPost: The Political Win that Could Make Elizabeth Warren the Next President of the United States

“The draft movement is real, and it has gathered traction nationwide.

“‘Run Warren Run’ activists are already working on the ground in the first caucus state of Iowa. And, on Saturday, in Manchester, New Hampshire, Democracy for America and MoveOn.org Political Action members are set to formally launch the ‘Run Warren Run’ effort in the first primary state.

“The advocates for a Warren run are not backing off.

“‘We understand that reporters are required to follow every twist and turn of the 2016 race, but let’s be clear: this isn’t a new position for Senator Elizabeth Warren. Senator Warren has been clear for years that she isn’t planning on running. If she were running, there wouldn’t be a need for a draft effort,’ explained MoveOn.org and Democracy for America activists in a Tuesday response to the Fortune interview. ‘We launched the Run Warren Run campaign to show Senator Elizabeth Warren the tremendous amount of grassroots enthusiasm and momentum that exists for her entering the 2016 presidential race and to encourage her to change her mind.’

“Those grassroots groups are right.”