In 2018, MoveOn members helped power spectacular victories at the ballot box, fought back against attacks on our democracy, and provided critical aid to those facing humanitarian crises at home and abroad.

Millions of MoveOn members were part of a movement that ended Republican control of the House, marched against gun violence, fought brutality at the border, stood by survivors of sexual assault, and did so much more. The fact that there’s now a check on GOP control of Congress, and a whole slate of new and bold, diverse, and progressive leaders in office — from Congress down to county commissioners — is the result of the dedicated work of MoveOn members and so many partners.

Here’s some of what we all contributed to in 2018:

Here are 11 of MoveOn members’ biggest accomplishments of the past year:

Millions of MoveOn members helped power a historic blue wave that elected a diverse slate of progressive champions. Together, we ended Republican control of the House. And we helped flip key governorships. MoveOn also launched a Resist & Win program which combined grassroots resistance energy with innovative technology and tactics to support hundreds of diverse, progressive candidates up and down the ballot. Ultimately, our work together meant that hundreds of thousands of additional people cast votes for Democrats—and made an essential difference in races across the country.

We endorsed over one hundred down ballot candidate races around the country.

All politics is local. That’s why this year, MoveOn invested in the biggest down ballot program in our 20-year history. MoveOn members endorsed over a hundred diverse and progressive candidates for state and local elections across the country. Our candidates ran for and won offices in state executive and legislative bodies, county commissions, city councils, and even school boards. Of the state and local candidates we endorsed, 72% were people of color, 64% identified as women, 15% identified as LGBTQ, and 8% were Muslim-American. This diverse group of candidates will have a massive impact in local communities for years to come, making sure school boards, city councils, and state legislatures move in a more progressive direction.

A Blue Wave Up and Down the Ballot

The blue wave is coming to the state and local level. We can create a country where everybody can thrive by electing amazing candidates like these across the country.

We helped protect the Mueller investigation — mobilizing to say that Nobody is Above the Law. 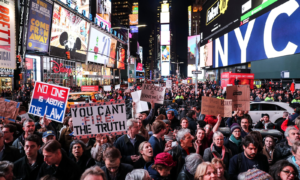 The day following the midterm elections, Trump fired Jeff Sessions and crossed a major red line regarding the Mueller investigation. Immediately, Americans from all backgrounds and walks of life went into action, declaring that “Nobody is Above the Law.” More than 100,000 people took to the streets at hundreds of events across the country to demand that Trump crony and new acting Attorney General Matt Whitaker recuse himself from the Mueller investigation. The network will continue to monitor Trump and will activate again if/when Trump crosses another red line.

We fought to keep immigrant families together.

When Jeff Sessions announced his inhumane “zero tolerance” family separation plan in early May, MoveOn–along with the Domestic Workers Alliance, ACLU, and over 180 other organizations–quickly organized massive nationwide rallies for June 30. Hundreds of thousands of people turned out to nearly 750 rallies in all 50 states plus Puerto Rico, from a dozen protestors in Antler, ND (pop: 27) to 70,000 in Los Angeles, CA. This mobilization contributed to a broad movement supporting immigrants and refugees — a movement that has, against the odds, won partial reversals of the policies that we had been told couldn’t be reversed and secured a court action declaring the administration’s actions to be clearly illegal. In 2019, MoveOn will continue to fight for the rights and the dignity of immigrants, refugees, and asylum seekers.

We began to end US involvement in the war in Yemen.

For years, the United States has provided arms and logistical support to the Saudi Arabian government and its war in Yemen. This has resulted in the largest humanitarian crisis in the world: tens of thousands have died, and hundreds of thousands more are at risk of famine and disease. In response, over 70,000 MoveOn members signed petitions condemning U.S. involvement in the war, made over 8,000 calls to Congress, and left 5,000 flowers on Capitol Hill. After years of campaigning, the Senate finally voted in December to end U.S complicity in the Saudi-led war in Yemen.

This is a victory for the people of Yemen who have been suffering from the ongoing conflict. And this vote marks a starting point of the end of our involvement in unauthorized wars. It also demonstrates U.S. willingness to hold accountable our allies that commit systematic human rights abuses.

He escaped the airstrikes

The Senate just voted to end U.S. involvement in Yemen! We're now one step closer to ending this crisis. In January, both chambers of Congress must vote to end our involvement once and for all. #YemenCantWait

We stood with Dr. Blasey Ford. 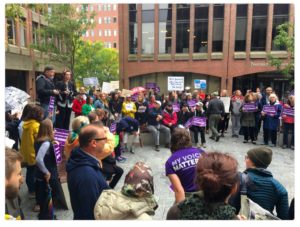 When Dr. Christine Blasey Ford came forward with allegations of sexual assault against Supreme Court nominee Brett Kavanaugh, MoveOn sent a clear message. We stood unwaveringly alongside Dr. Blasey Ford as we stand alongside all survivors. We see you. We hear you. We believe you. We have your backs. And we want you to know that your bravery is making change in this country.

The energy, passion, and fierce activism on display during Kavanaugh’s nomination hearings demonstrate the fury that voters–especially women– have long felt. Kavanaugh’s confirmation has only added fuel to that fire. We know that progressive voters are engaged in the fight for our courts like never before. We understand what’s at stake and we will keep fighting to protect the courts from Trump’s dangerous agenda. Kavanaugh’s confirmation is not the end of this fight. It’s just the beginning of another chapter in our battle for justice, equality, and civil rights. We are not defeated. We are determined.

We raised over $500,000 for victims of the California wildfires.

In November of this year, tens of thousands of people were left homeless following the deadliest, most destructive wildfire in California’s history. Tragically, 86 people were killed and thousands of homes and businesses were destroyed. Even those who did not lose their homes were barred from returning because the debris and ash surrounding their neighborhoods was toxic.

That’s why on Giving Tuesday, MoveOn raised relief funds for the North Valley Community Foundation, which is on the front lines helping families displaced by the fire. MoveOn members came together–just like they did after Hurricane Maria in Puerto Rico and after the Flint water crisis–to provide much-needed assistance. Through donations big and small, MoveOn members raised over half a million dollars that helped provide temporary shelter, food, and other basic services to the people that have been displaced. Our donations cannot wipe away the tragedy, but together we can ease the burden of those who are suffering and those who are working around the clock to help them.

We continued to fight to end gun violence. 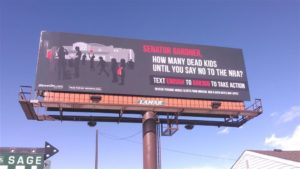 From schools to synagogues, newsrooms to bars, gun violence, and mass shootings continue to ravage our communities. In 2018 alone, there have been over 300 mass shootings–and incalculable pain and trauma  But out of these tragedies, we also saw the rise of a new generation of activists with the March for our Lives students.

Recognizing that the Parkland survivors are part of a long and storied tradition of young people organizing to end gun violence in their communities, MoveOn donated $100,000 in grants to Black and Latinx-led organizations working on gun violence prevention. These groups are: Black Youth Project 100, Color of Change SuperPAC, Community Justice Reform Coalition, Dream Defenders, Homeboy Industries, Life Camp, inc, Power U Center for Social Change!, and Urban Peace Movement. We’re working to amplify the voices of young people, especially Black and brown youth, whose fierce and transformational organizing to end gun violence hasn’t received as much attention as the Parkland students’ efforts. 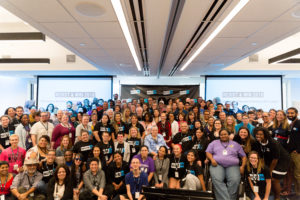 For the first time in nearly a decade, MoveOn held a member training summit! In August 2018, 120 leaders from 35 states participated in MoveOn’s National Grassroots Leadership Summit—our first in-person national training since 2010. Hundreds more participated in online trainings, building skills to become better activists and organizers. These Resist & Win leaders then took their knowledge and dedication home, where they hosted over 1000 local “Wave” events in over 100 districts. They knocked on doors, made calls, and sent texts to get out the vote. MoveOn members and leaders know that Election Day was not the finish line. We’re committed to holding elected officials accountable to a progressive vision of an America where all of us can thrive, and we’re determined to build upon the blue wave we helped deliver this year. 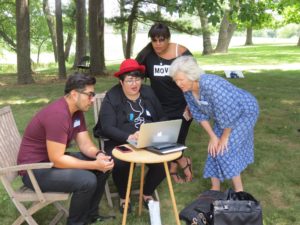 This year, MoveOn launched a first-of-its-kind “Real Voter Voices” program, where we collected 2,500 selfie style videos of real people from all walks of life sharing their reasons for voting. After testing, we ran over 260 video ads in 90 House districts, 10 Senate races, and 10 gubernatorial races, including Spanish-language ads in Texas. We targeted over 20 million voters in key races and project that we moved hundreds of thousands of votes for Democrats. We were one of the top spenders on Facebook ads in the final two weeks of the election. The program likely added hundreds of thousands of Democratic votes to midterm totals, and may have been the difference in many close races.

We are changing our look and lifting up our core values, like equality, sustainability, justice, and love. We are democracy in action and we stand for people-powered progress. We are MoveOn.

This year, we launched a new website and changed our logo! The new website and brand reflect the core of what MoveOn is about: We are democracy in action, and we stand for people-powered progress—the idea that millions of us, working together, can and will play a vital role in creating a more just country where everyone can thrive. Our new website lifts up our core values, like equality, sustainability, justice, and love. And it is designed to make MoveOn members’ work and impact more visible and more impactful. This is the most comprehensive update to MoveOn’s logo and website—our petition pages, donation pages, blog posts about our campaigns, and more—that we’ve made in our 20-year history.

Our new look isn’t just a facelift—it is a reflection of what we stand for. Since our founding, MoveOn has used technology to connect Americans in ways that build our power to change our country and communities for the better. Given how much time Americans now spend on social media, video, and mobile — and given how these tools have transformed the way we can organize and campaign together — we worked to make sure our digital and real-world tools and presence are as strong and functional as possible. Equipped with these updated tools, MoveOn members helped bring about a blue wave, ended Republican control of the House, elected diverse candidates to state and local officials, and continued our tradition of fighting for justice.