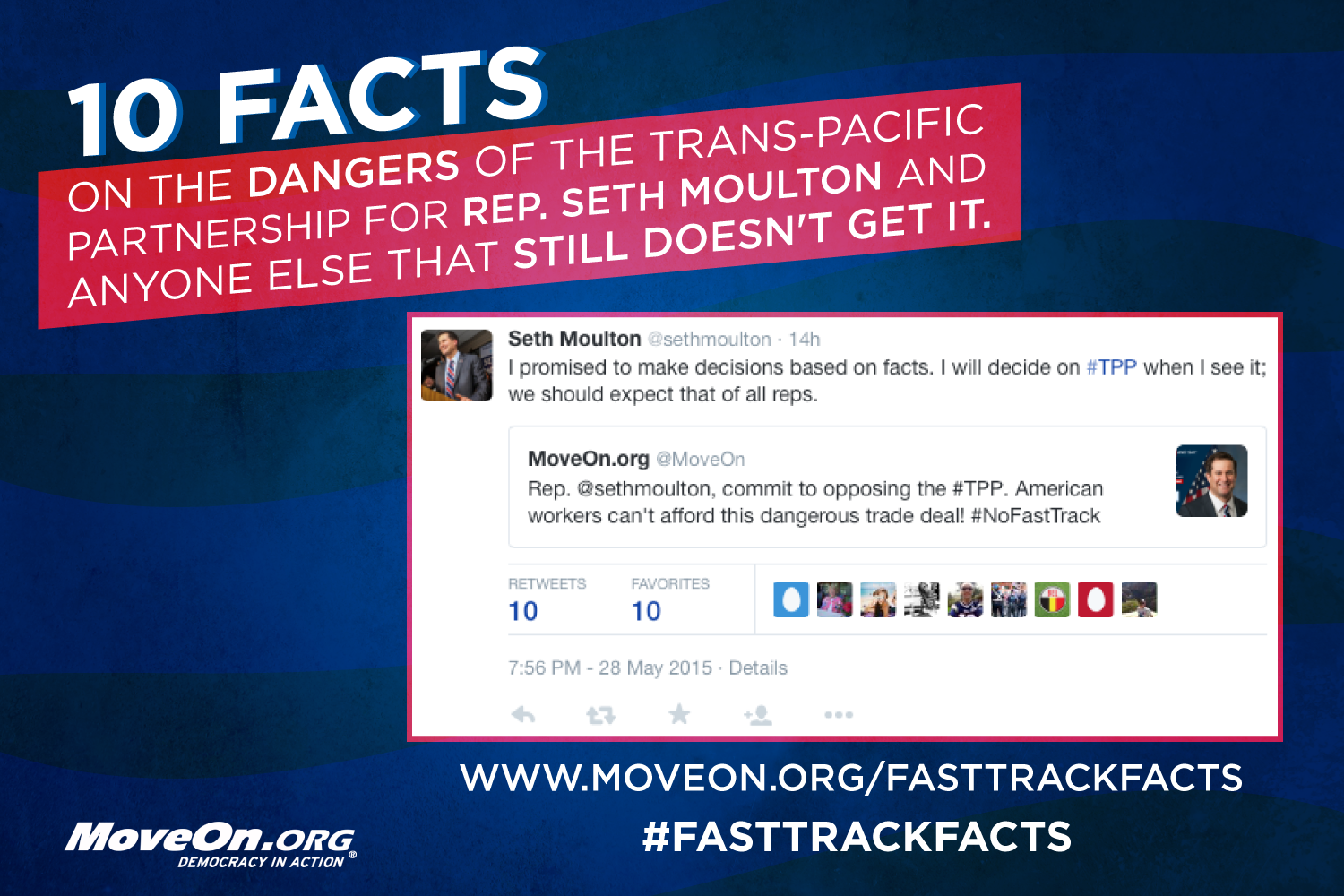 For the past two weeks, we’ve been running a daily Twitter campaign to convince the last handful of undecided House Democrats to commit to saying “#NoFastTrack” for the Trans-Pacific Partnership—a secret trade deal that could have huge effects on our economy, environment, and so much more.
Yesterday, as part of that push, we sent a tweet to Representative Seth Moulton asking him to commit to opposing the TPP and Fast Track. This was his response:

Just like Rep. Moulton, the American people want to see this secretive trade deal too. The problem is that if Fast Track passes, by the time the TPP text is released, it will be too late for Congress or the public to make any changes. Here is a list of ten #FastTrackFacts showing why that is so dangerous, and why lawmakers should oppose Fast-Tracking the TPP. Check them out and then share with your friends.

Ten #FastTrackFacts for Rep. Moulton (and anyone else that still doesn’t get it).

1. Fast Track will cost American workers jobs. How do we know this? History! Previous trade deals that have been adopted under Fast Track have cost us more than 1 million American jobs and have contributed to 60,000 American factories being closed in favor of outsourcing.

2. Fast Track gives powerful lobbyists the power, not the American people. Throughout the TPP’s negotiations, only powerful lawyers and lobbyists have had a chance to weigh in. This is probably why fast-tracked trade deals almost always include rights and privileges for foreign investors that our American businesses don’t have.

3. Fast Track undermines democracy. Fast Track doesn’t allow for public scrutiny of trade deals like the TPP while they are being negotiated. This leaves the voices of the American people—and our representatives—out of the equation.

4. Fast Track takes power away from our elected officials. Fast Track doesn’t allow our representatives to amend trade deals, no matter how problematic any of the provisions may be.

5. Fast Track supports the 1% but not the rest of us. Fast Track ensures that trade policies are made by and for multinational corporations and the wealthy, making income inequality even more prevalent.

6. Fast Track lowers our access to medicines. The current Fast Track legislation includes objectives that would interfere with the ability of governments to ensure the provision of affordable, life-saving medicines.