These Are The People Who Actually Vote For Tea Party Candidates

This is not a joke.

The Scariest Gay Marriage Chart Ever

This Republican Is Totally Out Of The GOP Club

Outspoken anti-LGBTQ organizer Louis J. Marinelli, known for coordinating the National Organization for Marriage “One Man, One Woman” bus tour and claiming that “gays have shorter life spans,” has posted a surprising message on his blog.

This Conservative Guy Wants Your Kids To Get Beat Up

According to the very confused conservative leader Andy Blom, the entire anti-bullying agenda is not about keeping kids from getting bullied—it’s actually a way to “force homosexual teaching into schools.”

This past February, Lady Gaga told Billboard that if Target didn’t make amends for donating money to anti-gay political candidates, she would not release the Target exclusive edition of “Born This Way.” But Target didn’t comply. And on Wednesday, Lady Gaga officially walked: “Part of my deal with Target is that they have to start affiliating […]

‘Every Time Two Gays Get Married, A Traditional Family Explodes’ 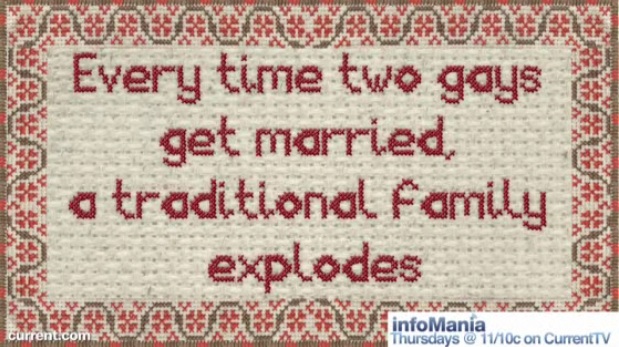 Who Said Politics Has To Be Boring? (LA Edition)